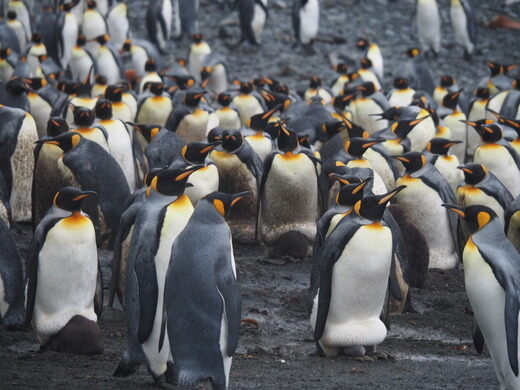 Introduction. Introduced rabbits, rats and mice have caused widespread and severe ecological impacts on the native flora, fauna, geomorphology and natural landscape values of Subantarctic Macquarie Island. Major impacts include the destruction of almost half of the island’s tall tussock grassland and the depletion of keystone palatable species, a decline in the abundance and or breeding success of a range of seabird species due to habitat degradation, increased exposure to the elements and predation, as well as increased slope erosion. The Macquarie Island Pest Eradication Project is the largest eradication program for rabbits, ship rats and mice in the world.

The overall goal of the pest eradication project was to eradicate rabbits, rats and mice from Macquarie Island to enable restoration of the island’s natural ecological processes including the recovery of plant and animal communities impacted by these feral species.

Works undertaken. The Tasmania Parks and Wildlife Service developed a plan for the eradication of rabbits and rodents on Macquarie Island that was approved by the federal Minister of Environment in 2006. Following lengthy negotiations and a donation of $100,000 by the World Wildlife Fund (WWF) and Peregrine Adventures, funding of $24.6 million for the project was secured in June 2007 through a joint state and federal government agreement.

The three major components of the Macquarie Island Pest Eradication Plan after the initial planning and organisation phase were:

Following two years of monitoring without any evidence of the target species, the project to eradicate rabbits and rodents from Macquarie Island was declared successful in April 2014. A variety of established research/monitoring projects on threatened native plant species, invasive plant species, plant communities and ten species of seabirds on Macquarie Island have been used to provide biologic data on changes in abundance, distribution and condition (see Evaluation Report 2014).

Vegetation. Vegetation recovery was well underway by 2013, when vegetation biomass on the island had increased by a factor of five to ten compared with 2011 levels.

Annual meadow grass has decreased markedly in abundance away from areas of seal and seabird disturbance, while Mouse-ear Chick Weed (Cerastium fontanum) and Garden Chickweed (Stellaria media) initially increased in abundance between 2011 and 2013 but have since declined.

The previously ubiquitous Subantarctic Buzzy has declined dramatically with competition from other species, while the previously less common Little Burr (Acaena minor) is now more prevalent.

The megaherbs Macquarie Cabbage and Macquarie Megadaisy (Pleurophyllum hookeri) and Tall Tussockgrass are beginning to spread and establish across the island (Figure 1). It is predicted that a combination of these species will become dominant in much of the coastal and slope vegetation over time, with Tall Tussockgrass already increasing in cover in many areas. The prickly shieldfern is expanding from a few remnant populations by recruitment or regeneration in former exclosures, as well as establishing in new locations.

Seabirds. A combined total of 2418 individual native birds were recorded as killed via primary and secondary ingestion of broadifacoum poison during the winter baiting of 2010 and 2011. These numbers are minima, since many were predated before detected and others died at sea. Kelp Gull (Larus dominicanus) sustained the largest mortality (n=989), followed by Giant Petrels (Macronectes spp; n=761), Subantarctic Skua (Catharacta skua) (n=512) and Black Duck (Anas superciliosa) (n=156). Existing monitoring programs enable the population consequences of this mortality to be evaluated for both species of giant petrel and for skua, however baseline data for gulls and ducks on Macquarie Island are lacking. The mortality event was associated with a 25-30% reduction in the breeding populations of both giant petrel species, however ongoing monitoring reassuringly shows both populations to have stabilised and appear to have resumed the increasing trajectory that they were undergoing before the mortality event. Skua were heavily impacted, with breeding numbers reduced by approximately 50% in monitored sites. There is minimal sign of recovery for this species in recent years. The response of this species to the sudden removal of a primary prey item (rabbits) and the consequent flow-on ecosystem impacts is the focus of current investigation.

Lessons. Perhaps one of the most important lessons learned is the value of biological monitoring data, before during and after such an eradication program, which provides the basis for effective adaptive management as well as evaluation of success or otherwise.

The other salutatory lesson is the complex biological inter-relationships that exist and a need to more explicitly factor in the consequences of the ‘unknowns’ in associated risk assessments.

Acknowledgement. Thanks to Micah Visoiu for most recent vegetation data. 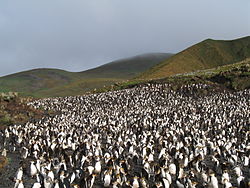 A week in the life of a wildlife ranger on Macca.

A week in the life of a Macquarie Island wildlife ranger

Two Tasmania Parks and Wildlife Service rangers are based on Macquarie Island this year and, even though the days of winter are considerably shorter than summer, there is always plenty to do. Chris Howard and Mike Fawcett are into their second season on Macca. Their collective knowledge and experience gained over the previous year is really being put to good use as the island regenerates without pressure of rabbits, rats and mice. Chris, as the ranger in charge, is generally responsible for daily management of the island including works programmes, tourism management, track maintenance and administration. Mike, as the wildlife ranger, is primarily focused on wildlife research. The reserve is home to some 35 species of animal including penguins, burrowing petrels, albatross, seals, whales and dolphins. Mike’s extensive knowledge of the island landscape, gained as a hunter with the Macquarie Island Pest Eradication Programme, continues to be put to good use as the island is now being monitored during the post eradication stage.

The role of rangers on Macquarie Island nature reserve and world heritage area is really no different to that of their counterparts working anywhere else in Australia, however their office is quite unique. The terrestrial component of the reserve where rangers spend most their time covers a total area of approx 12785 hectares, just over 14% of the greater reserve area of 87500 hectares. The greater protected area includes some outlying islands and surrounding waters out to 16 nautical miles, just under 22 kilometres.

So , what do they actually do? Tasks at the present include monitoring the breeding activities of the grey petrel, a burrowing seabird that nests in steep tussock-covered slopes. So far this season, approximately 35 burrows are being monitored for breeding activity. Blue petrels are also active at this time of year and rangers are out looking for their breeding locations. This season six wandering albatross chicks are being monitored over winter. The birds are all located in the remote southern corner of Macquarie Island and are checked monthly, with rangers taking care to observe from a safe distance as to ensure minimal disturbance. Information is sent back to researchers in Hobart as part of a greater albatross monitoring programme. Macquarie Island is an incredibly important breeding location for many bird species. Populations here have suffered from the impacts of cats, rodents and rabbits. It’s still early days on the island in the post eradication era, but the signs are good. King penguin chick population is also being monitored over winter in some locations.

The eradication of rabbits has also meant that the island flora is starting to recover. Recently, a significant tussock grass species was found growing well outside of its previously recorded range. Poa litorosa was only known to be growing in a couple of isolated locations, but recent observations have expanded the range of the species significantly. The grass has always been there — it was being eaten off by rabbits. One task of importance at the moment is the dismantling of all the old wire grazing enclosures before they disappear in the long grass. These plots have been used by researchers for many years to monitor the impact of rabbits. The wire and rusted star pickets can now be removed to prevent possible injury to wildlife. The plots still contain very important floristic information, so the steel pickets are being replaced with more flexible plastic conduit.

The weather on Macca takes a bit of getting used to. Days of sunshine are certainly appreciated amongst the gray rainy days — you learn to take it in your stride. It is not uncommon for rangers work solo, be in the field for two to three weeks at a time and to clock up 80 to 100 kilometres a week as they go about their tasks. No quad bikes or four wheel drives to use — good old fashioned walking!

There’s always other jobs to be done. Decking to be repaired, track markers, or even the preservation of historic artefacts is a really handy one to have up your sleeve for the days when nature says it’s best to be inside. And there is no escape from the administrative tasks — a week in the field will always result in a couple of days worth of reports. In amongst all of this, there is still our fair share of station duties to do as well.

And that’s just in a quiet week over winter. Wait until summer gets here and we start to get busy!

A special award from the Macquarie Island Ratepayers Association (MIRPA)

The MIRPA special award: extraordinary repairs to the bar fridge!

It’s early evening, Sunday the 6 July, a quiet day on Macquarie Island station and everyone is off doing their own thing. Paul Deverall, station electrician (and officer in charge of station home brewing) comes into the mess and notices the bar fridge has gone quiet very quiet. So quiet in fact that it’s not working at all. Beads of perspiration suddenly emerge from his forehead, as he realises this may be disastrous, not only for the brew master, but for station morale in general! He thinks to himself, surely this is an easy fix, but no! After a full day of fault finding, replacing parts, and searching theinternet, the pressure was on for Paul to come good with the bar fridge. And after further dedicated perseverance, application of intuition, and skilled improvisation based on a lifetime of experience, Paul triumphed.

On the morning of the second day, Paul gave building services supervisor Graeme a quietly confident nod, and with a wry smile, gave the thumbs up. Station morale had been restored.

And so it was that for outstanding services beyond the call of duty and valour, ingenuity, perseverance, stress and finally overcoming incredible pressure from the station observers, Paul received the MIRPA special award, ‘Certificate of Appreciation'.